I started to make fajitas, but the weather was cold--it ended up being soup/stew. 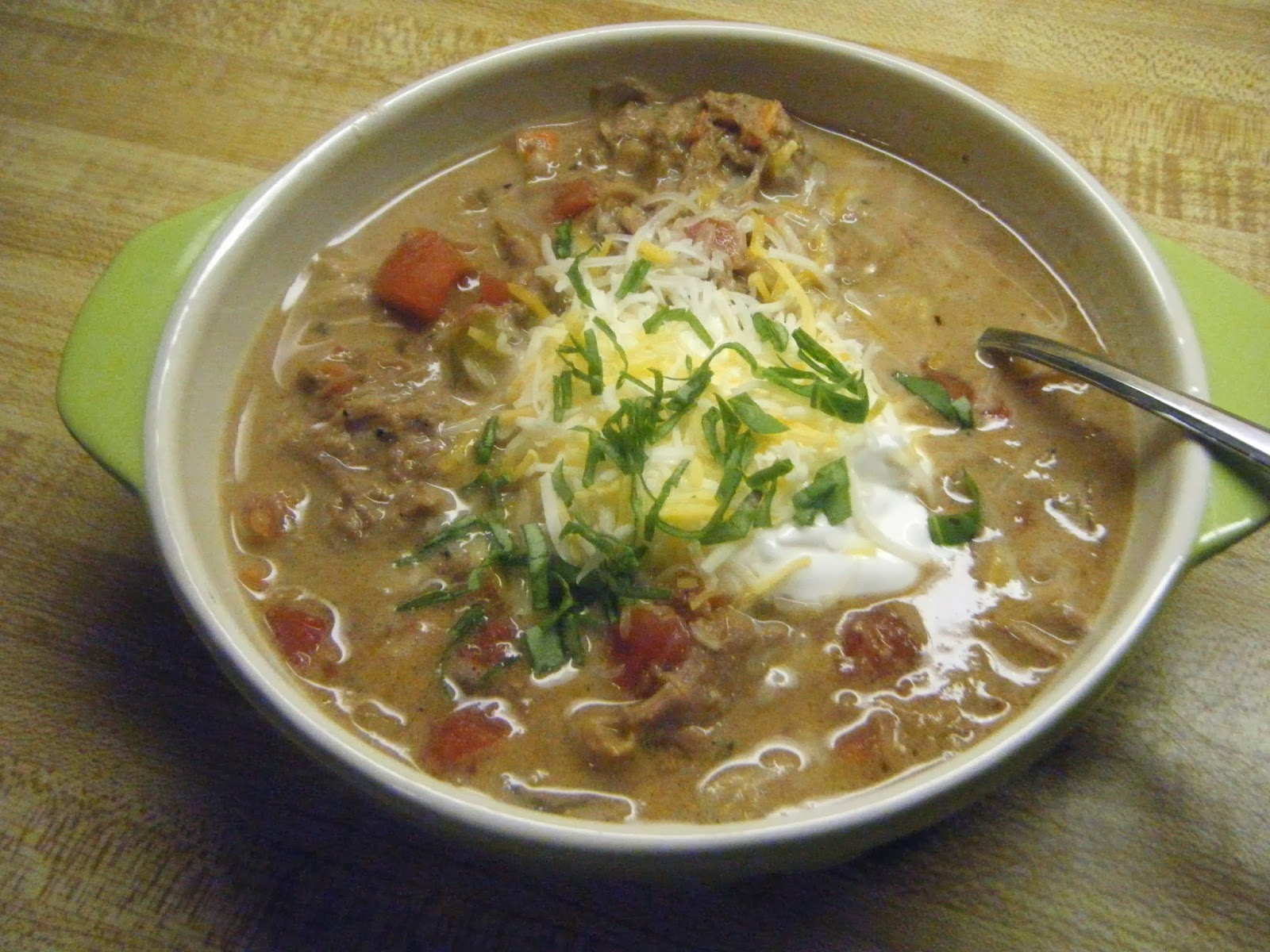 1. Prepare the meat. I bought whole pieces of brisket, marinating in fajita seasoning from HEB. The night before, I dumped the package--marinade and all--into the Crock-Pot. I let it cook overnight (about 6 hours). In the morning, I took the slabs of meat out of the broth and placed the meat on the cutting board for slicing.
2. I cut the cream cheese into 1-oz chunks and put them into the broth (still in the Crock-Pot) to soften.
3. I cut up the meat and then used a hand-blender to blend the cream cheese.
4. When the cream cheese had been blended, I added the carrot dices to the broth so that they began to soften.
5. Stir in the jalapeno juice.
6. I added the meat back to the broth and put the Crock-Pot back on Medium.
7. I chopped the onion and browned it in a little coconut oil, then added the thinly-sliced celery. I let the celery heat, then turned off the fire and put the lid on the skillet.
8. I added the salsa and Rotel to the meat/broth mixture, and then transferred the onion/celery mixture to the Crock-Pot, stirring well.
9. I kept the soup/stew mixture to cooking until the carrots were fully rehydrated and the fajita flavors had blended well. In this case, I let the soup/stew simmer for several hours--the time from about noon, when it all came together, until dinner

Serve topped with sour cream and a bit of shredded cheese (not included in nutritional values).

When I was in Zimbabwe last year, I tried a delicious dish that was slow-cooked in a three-legged cast iron pot over coals. The dish took an entire day to cook, and the meat came out very tender, with a rich gravy. The Potjiekos I ate in Victoria Falls was made with kudu (an antelope-type of animal), carrots, and potatoes. There may have been onion in there as well. I made my own version--using beef stew meat--in my Crock-Pot. It is delicious! 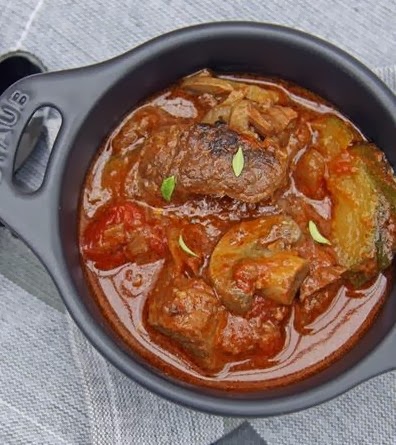 I just used what I had handy--the dish grew from a package of "red-line" (discounted for quick sale) stew meat, leftover salsa (uncooked) from my favorite Mexican restaurant, and other things I had in the fridge/pantry.  You can add onion, mushrooms, or cabbage and still keep it fairly low carb, but the nutritional value given at the end of this post would have to be adjusted for new ingredients.

This is my version of Potjiekos.  It needs to cook a little longer and thicken a bit more.  I've had a taste--delicious! 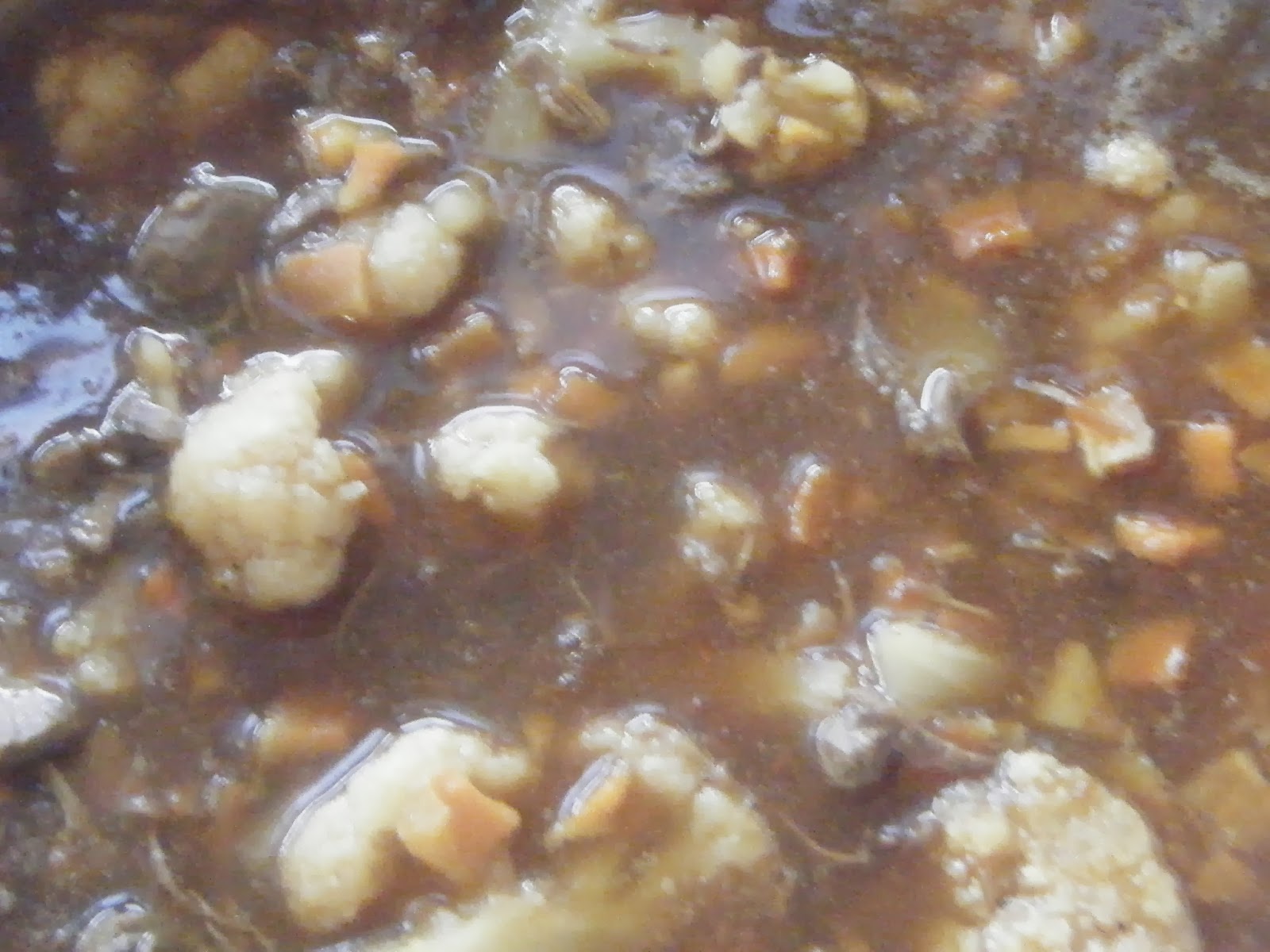 Directions
Please note that the cook-time is approximately 12 HOURS. It takes about 10 minutes to prepare the ingredients (brown the stew meat) and then about 12 hours in the slow-cooker.  For best texture, add the cauliflower about 2 or 3 hours before serving (it may turn to mush if you cook it overnight).

The cook-time will vary. Different people have different tastes, and some may want thick gravy while others don't. Some may want the cauliflower al dente, while others (like me) want it to be more of a cooked-potato texture in this stew.  If everything is the right texture, but the gravy hasn't cooked down enough, you can sprinkle in some guar gum and stir very well.  Give it a few minutes (on "high") and the gravy will thicken.
PS: This would be a great way to cook venison!

Posted by Unknown at 9:11 AM No comments: